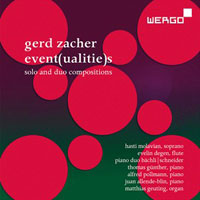 Description: During his lifetime, Zacher was well known in contemporary music circles as a major performer of avant-garde music for the organ, associated with works, many of which he premiered, by composers as diverse as Juan Allende-Blin, John Cage, Giuseppe Englert, Jörg Herchet, Mauricio Kagel, György Ligeti, Hans Otte, Dieter Schnebel and Isang Yun. He was also an authority on Bach's organ works. As a music theorist he concerned himself with the rôle of the virtuoso as responsible for the "presentation of an instrument according to the demands of the composition", which in his case implies the presentation of every possible facet of the instrument's possibilities, including a very wide range of extended techniques. The listener will probably discern two different aspects of the composer’s work on this album; firstly, short works demonstrating in great detail the instrumental ramifications of serialism (which may be more fun to analyze than listen to, though they have significant musical value, not least in displaying the distinct architecture that can be generated by atonal music with strict serial organization). Titles like that of one of the movements of Transformationen (1954) : “Continually changing series of three-part rhythmic cells; rotating accent within each cell" give a clear indication of the composer’s intentions in pieces of this type. And secondly, and probably more enduringly in terms of Zacher's compositional legacy, fantastical soundscapes with a sense of narrative order, flow, and coherent form - paradoxically, in the case of the major work here, 75 Event(ualitie)s für Orgel (1987) which was written for John Cage's 75th birthday and contains a significant chance element. The score consists of 75 cards, containing notated events (anything from chords and rests to the reduction of organ blower pressure or sounds produced away from the organ including shouts or singing), played in entirely random order. Simultaneously, Siebeneinhalb Dezennien by Juan Allende-Blin, a composition for piano played with contact on the strings by objects like tennis balls to blur the attack, articulation and pitch differentiation of the piano, the results assembled and transformed into a tape composition, is played over spatialized loudspeakers in the church. The result is perceived as a coherent flow of events refracted and blended into one another, constantly inflecting the listener's understanding of each other’s rôle in the perceived narrative. Two realizations of the work are presented here. In Jonah’s Prayer from the Belly of the Fish (1964), the dissimilar duo-protagonists are the soprano, singing Jonah's precisely notated prayer, and the immersive all-enveloping organ, so clearly depicting the whale and the water surrounding the prophet, whose voice struggles to escape from its fluid surroundings while being in a constant intimate relationship with them. Honorable mention to Explosiva, another hugely satisfying piece not coincidentally for the composer’s own instrument, but much shorter, the hidden structure of which is based on the 22 letters of the Hebrew alphabet and should therefore be heard as a frankly humorous compendium of plosive consonants (rather than an explosion of the detonative kind). Only at the end are sustained "vowels" and a final, massive chordal "word" to be heard. L'heure qu'il est, inhabiting the eerie twilight world of quarter-tone interactions between the two pianos, is notated as two separate scores, so that when one piano is heard for a few chords or successive notes in isolation, familiar harmonic structures and timbres seem to be implied, only to be recast in an instant into an alien "color out of space" by the most innocent entry of the other piano. 2 CDs. Matthias Gauting (organ), Klavier Duo Thomas Bächli/Gertude Schneider, Thomas Günther, Alfred Rollmann, Juan Allende-Blin (piano), Evelin Degen (flute), Hasti Molavian (soprano).