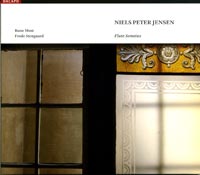 Description: The second Dacapo release of charming, delightful and melodious flute music - duets for two flutes in January of 2007 and now full-fledged, early-Romantic sonatas - from this blind Danish composer who was taught by Kuhlau and himself counted Løvenskjold and J.P.E. Hartmann among his own students. The F minor sonata actually predates Kuhlau's first flute composition which did not come until 1824. Rune Most (flute), Frode Stengaard (piano).