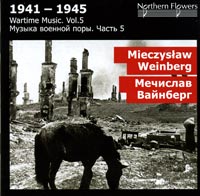 Description: In 1943, evacuated to the safety of Tashkent, the young Weinberg, who had heard some of Shostakovich's music while he was a music student in Minsk between 1939 and the Nazi invasion, produced this large-scale, 40-minute symphony which the composer Yuri Levitin, whom he met in Tashkent, sent to Shostakovich to read. This was the beginning of Weinberg's lifelong friendship with the older composer and it's not surprising that it "sounds like" Shostakovich (but there are echoes of Prokofiev in it too); what's surprising is how assured and affecting it is from such an inexperienced young composer. The cello concerto dates from 1945-8 and so is not really a "war work"; in fact, it's chock full of Jewish themes, just the sort of thing which the Zhdanov persecutions of the latter year forced into years of silence. A double-barreled treasure chest for Soviet music collectors! Dmitry Khrychov (cello), St. Petersburg State Academic Symphony Orchestra; Alexander Titov.