ILKKA KUUSISTO (b.1933): Symphony No. 1, Concertino Improvvisando for Violin and Small Orchestra, When the House Begins to Resound for Baritone and Orchestra. 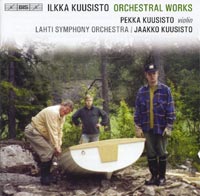 Description: This 1998 symphony is one of the most happy surprises we've had in a long while. Kuusisto studied under Aarre Merikanto but considered himself a jazz pianist for quite a while, while writing stage music and organ liturgical compositions as well as a handful of operas. When asked why he wrote operas, he answered that it was because they were commissioned. Thus came about the symphony, commissioned by Osmo Vänskä (at the time this orchestra's principal conductor), a relaxed, sunny, pastoral composition with prominent parts for trumpets, horn and cor anglais and whose second movement underlines its general pastoral quality by using music from a ballet Robin Hood of 1985. The 2006 concerto's first movement in rooted in Nordic folk music, the middle in slow swing and the finale in Latin American rhythms; it also contains several sections which chord indications where the soloist is expected to improvise. The 18-minute cantata, for the opening of the new opera house in Helsinki in 1993, is as approachable as the rest of this wonderfully entertaining disc. Finnish-English texts. Pekka Kuusisto (violin), Jorma Hynninen (baritone), Lahti Symphony Orchestra; Jaakko Kuusisto.