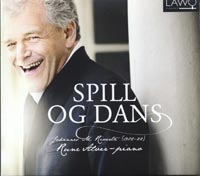 Description: Rivertz was a lawyer by training and an appeals court judge but, in addition to his "day job", he was also influential in getting a permanent opera company established in Oslo, was on the board of the Oslo Philharmonic and was involved with his country's artists' rights organization. He also composed a little: these are his complete piano works, founded in Norwegian folk music. Games and Dance is a 17-minute, three-movement quasi-tone-poem from 1945 which was inspired by Halfdan Egidius' famous painting of the same name (you'll probably know it from an NKF LP or CD cover!). Rune Alver (piano).