MARC-ANTHONY TURNAGE (b.1960): From the Wreckage for Trumpet and Orchestra, Speranza for Orchestra. 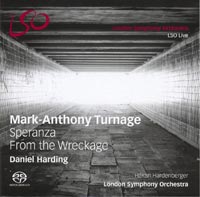 Description: From the Wreckage (2005) is fairly typical of Turnage's output of the time and the previous several decades in that it treats somewhat dark psychological territory, and is substantially inflected in its idiom by jazz. Neither is as extreme as some of his violently confrontational earlier scores; here the constantly present soloist seems to give voice to the process of working through the turmoil of some inner crisis, emphasized and illustrated by the orchestra. Speranza is 'about' hope, in various tumultuous and tragic human situations throughout history. A substantial recent (2012) work in four movements, it has symphonic shape and ambition, in a bold, tonality-based idiom. The textures and thematic development are sophisticated and the argument, while still confronting unmistakably dark themes, relies less on shock and startling jazz intrusions than used to be the case, though the instantly accessible vernacular touch remains; in a sense this, in common with the composer's other recent scores, is more conventionally neo-romantic, but none the less convincing for that. Håkan Hardenberger (trumpet), London Symphony Orchestra; Daniel Harding.