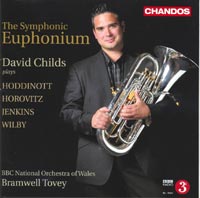 Description: Four different kinds of concerto for the "tenor tuba" have been chosen for this release and one has to remember how recently this brass-band instrument has been accepted into the classical orchestra to account for their variety. Horovitz' was the first concerto for euphonium and orchestra (1972) and is given the composer's typical conservative and melodic treatment with hints of English pastoralism in its slow movement. Wilby's 1995 concerto was originally for euphonium and brass band and introduces high technical hurdles for the soloist, especially in its Zeibékikos Greek folk-dance movement. Jenkins' 2009 concerto, written for the soloist here, offers a wide-ranging display-piece for the soloist, demanding crowd-pleasing technique as well as offering lush, slow romantic opportunities as well. But the best music here is Hoddinott's: his single movement concerto from 2002 is in six sections played without pause and strikes the listener with its luminous orchestral color, making use of harp and, as the composer put it "...spiels and ...phones" which flavor but never compete with the euphonium. This is wonderful music where the euphonium happens to be the solo instrument rather than a display piece. David Childs (euphonium), BBC National Orchestra of Wales; Bramwell Tovey.