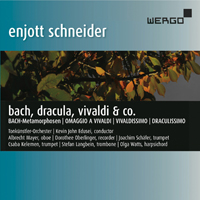 Description: Great stuff! We've had many enthusiastic things to say about Schneider's imposing neo-romantic symphonic works (10S010, 11R086, 02Q073, 08Q074) and his ingenuity in incorporating diverse æsthetics, idioms and influences into a wholly original vocabulary. Now we have the composer in lighter, playful mood, displaying his versatility, impeccable craftsmanship and sense of humor. All four pieces are modeled in some respects and to a greater or lesser degree on the Baroque concerto, though given Schneider's broadly neo-romantic tendencies this is often a romantic and post-modern view of the Baroque: actual neo-baroque pastiche is largely absent, and the baroque elements are affectionate homages rather than ironic parody. Fast movements have the invigorating buoyancy of authentic baroque concerti; slow movements, notably the lovely aria (after Bach's St John Passion) that forms the slow movement of BACH-Metamorphosen, are elegant and elevated in mood. Sly references like this are all over the place; the BACH motif and the Goldberg Variations provide material for this same work, and the Vivaldi homages contain quotations, allusions and Vivaldian gestures galore. Draculissimo extends the tongue further into the cheek; based on Baroque structures (with a wink at minimalism), this is a product of Schneider's film music career in concert garb. Silent horror films, horror parodies, cliché and cartoonish exaggeration are all evoked by this kaleidoscopic riot of clever, punning entertainment. Albrecht Mayer (oboe), Dorothee Oberlinger (recorder), Joachim Schäfer, Csaba Kelemen (trumpets), Stefan Langbein (trombone), Olga Watts (harpsichord),Tonkünstler Orchestra; Kevin John Edusei.