JOHN PICKARD (b.1963): Binyon Songs, The Phoenix, The Borders of Sleep. 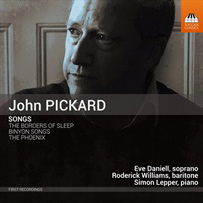 Description: Thus far, Pickard's reputation has principally rested on a series of immensely impressive large-scale orchestral works, continuing the Nielsen-Simpson axis (e.g. 07T008, 08Q082, 03O093). It is thus unsurprising that his, to date limited (to the works here) output for voice and piano would explore similarly epic themes and spans - the song cycles form satisfying structures of expressive contour, and the early The Phoenix is long and likewise follows a sectional but continuous arc; in other words, the symphonist still thinks symphonically, even when writing songs. The text of The Phoenix was freely adapted by the composer from a Christian allegory from the 9th century, set dramatically as befits the fantastical nature of the poem, in a more florid style than the more recent song cycles. In the settings of powerful war poets Laurence Binyon (They shall grow not old / as we who are left grow old ...) and Edward Thomas, as the composer puts it "as I worked on the songs a sort of imaginary narrative began to emerge" and this is clearly evident in the dramatic arc of the evolving moods throughout the cycles. Binyon's desolate imagery brings out the most dissonant harmony, while Thomas' obliquely tragic descriptions of decay and death in nature are rendered in music of more detached, less demonstrative melancholy, but Pickard's familiar extended tonality is the prevailing idiom throughout. Texts included. Roderick Williams (baritone), Eve Daniell (soprano - The Phoenix), Simon Lepper (piano).