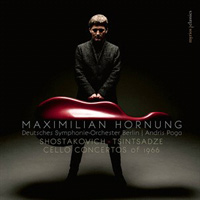 Description: Because both concertos were composed in 1966 we get a new-to-disc work by a more or less forgotten Georgian composer. A 23-minute piece in five “episodes”, it shares with fellow Georgian Giya Kancheli an inclination for melancholy and contemplativeness but stops well short of the latter’s violent dynamic contrasts. Tsintsadze’s soloist plays much quiet music which is mostly monothematic and four of the five “episodes” are marked Andante. Folk music appears in the Presto finale in a quite Bartókian style but the coda returns to a slow tempo, finally vanishing into inaudibility. Play it a few times in a row and it will grow on you. Maximilian Hornung (cello), Deutsches Symphony Orchestra Berlin; Andris Poga.