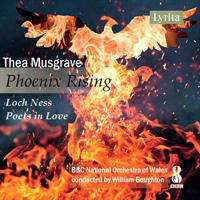 Description: The sprightly nonagenarian continues to turn out robust, accessible and individual works, with two new commissioned pieces premiered this year. This CD presents works from the decade before last, only now receiving their world premiere recordings. This is especially unforgivable (but better late than never) in the case of Phœnix Rising, a wonderfully bold, colourful and inventive neo-romantic symphonic poem. It traces a darkness-to-light trajectory in its action-packed twenty minutes, from the triumph of the belligerent forces of darkness in the opening section via desolation, hope, and after a chaotic confrontation (which wittily references L'oiseau de feu), the luminous triumph of the transfigured mythical creature. Loch Ness is a lighthearted souvenir from Scotland, written for the Proms. The Monster, portrayed by a virtuoso tuba solo, rises triumphantly from the gloomy depths, appears to be having fun hanging around long enough for a couple of blurry photographs, and then returns to the unfathomable waters of the loch. The substantial song cycle sets 17 poems from different centuries and cultures, offering a wide range of reflections on love, from the rapturously romantic to the cynical and worldly. The contrasting voices - sometimes solo, sometimes in duet - highlight different attitudes and emotions within the texts, lending great variety to the work, which plays without a break to suggest the evolving experiences of love throughout a lifetime. Texts and translations included.