GERALD BARRY (b.1952): Viola Concerto, The Conquest of Ireland for Bass and Orchestra, Beethoven: Syms. 4-6. 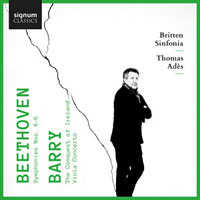 Description: The idiosyncratic Irish composer has an unique style, instantly and insistently recognizable. If you admire what he does, this Viola Concerto is a particularly clear and uncluttered example of it. His style consists of tonal chords grouped into simple gestures, usually played fortissimo and in exhaustingly confrontational repetitive groups with frequent irregular changes of time signature. Here these hectoring statements are separated by similar material in similarly constant note values, but played by the solo viola. The composer, revealingly, tells us that musical exercises "have always been pure things for me, clean, unburdened by meaning. They’re liberating and I always feel better psychologically and physically after playing them. I like their predictability, nothing unsettling, just flexing and stretching." This provides insight, perhaps, into his typical style, with its fusion of the portentous and the absurd. The piece ends, incongruously, with a brief melody (it sounds like an improvised folk-like tune) which appears out of nowhere, first played and then whistled, by the soloist. The composer supplies an anecdote, as random as the appearance of the tune itself, in the booklet. The Conquest of Ireland is based on an account by the twelfth century Welsh writer and cleric, Giraldus Cambrensis of the army that marched on Ireland, full of trivial minutiae which Barry extracts to set in frenetically active music (that is actually a performance direction in the score) that contradicts the banality of the text and substitutes in its rapid-fire cascades of sonic shrapnel for description of the actual action of battle, which is omitted. The vocal part is challengingly virtuosic (as is some of the instrumental writing, at the tempi demanded), and reminiscent of the headlong, fragmented, zig-zagging vocal parts in his his operatic works (see 10R072, 11Q080). 2 CDs. Laurence Power (viola), Joshua Bloom (bass), Britten Sinfonia; Thomas Adès.