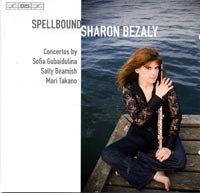 Description: Gubaidulina's concerto takes its cue from the T.S. Eliot phrase that forms its title, but is not a programmatic work, rather dealing with the interaction of opposites - in musical terms, opposites of pitch and pulse. Over the course of nearly half an hour the work moves through dramatically juxtaposed planes of material, from the opening; pure pulsation in deep percussion, to a lively confrontation between various flutes and insistent, tonally-based orchestral material. Takano's three-movement work reflects the composer's eclectic musical tastes, beginning with a lively movement in which neoclassicism rubs shoulders with a microtonally-inflected solo part, jazz and dissonant soundscapes. The middle movement is melodic, suggesting songs and waltzes from a naïve romantic tradition, but with dissonant polyphony and decorative elements bringing the music firmly up to date. The last movement incorporates rhythmic elements derived from popular music, towards an optimistic, forward-moving final section. Beamish's work, described by the composer as 'a mini-opera' tells the myth of the nymph Callisto, using the colors of the different members of the flute family as vivid characters in the drama. As usual for the composer, the predominant idiom is tonal, with dissonant excursions as appropriate to the musical argument. Sharon Bezaly (flute).