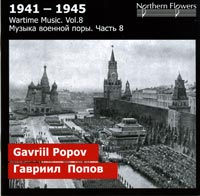 Description: Using material from a score for a film called "She Defends Her Motherland" which Popov spent much of 1943 working on while in evacuation at Alma-Ata in Central Asia, the composer produced his Motherland symphony later that same year. Its four movements divide into two parts - "Peace" and "War". The first, broad and slow, represents the Russian land and human potential which suddenly gives way to echoes of Lt. Kijé in a brisk, bright and mercurial presto giocoso; the horrors and grief of war arrive in the long, 13-minute Largo before a finale which depicts struggle and victory. The 18-minute suite of music for the film also known as "General of the Army" (1945) is a welcome example of Popov's dramatic scoring skills while the 1941 Red Cavalry Campaign, described as a "Symphonic Poster", is a riotous seven-minute piece of agitprop whose pre-war sense of invincibility and self-assurance turned out to be rather misplaced. Male Group of the Smolny Cathedral Choir, St. Petersburg State Academic Symphony Orchestra; Alexander Titov.