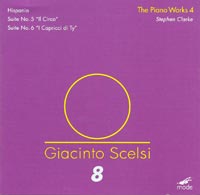 Description: From the end of Scelsi's pre-World War II early period come the 1935 Fifth Suite which plainly originates in the baroque concept of a suite of dances where the composer uses dance-like rhythms as the basis for a quasi-improvisational flow of ideas, some of which transform and develop and some of which collide in sudden juxtapositions. The Sixth (1939), dedicated to his wife, also tends toward the fast and energetic with Scelsi exploring all manners of articulation, attack and release, with carefully notated pedal markings; aphoristic gestures collide with violent outbursts in music which still has time for shimmering textures and a few hard-won moments of repose. Hispania is from the same year and French neo-classicism and impressionism are sometimes dimly glimpsed in music whose physicality, dissonance and violence match those of the Sixth suite. Stephen Clarke (piano).