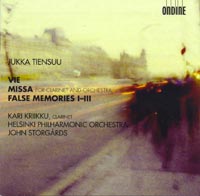 Description: Tiensuu's music is typically wildly eclectic in style, but invariably exudes a dynamic energy that is at once exhilarating, playful and instantly approachable and appealing. Vie is no exception; subtitled 'A Concerto for Orchestra' the piece begins in motoric momentum, the repeating gestures flying around sections of the orchestra in a kind of demented hocketing, before being interrupted by slower music involving some sliding tones and clusters, but applied with a light touch, in ingenious orchestral colors. Missa is indeed divided into the sections of the Mass; the apparently eccentric notion of casting the sacred liturgy as a clarinet concerto is actually remarkably effective. The work is grounded in tonality - less completely so than Vie, but very firmly - with the soloist playing the role of supplicant, celebrant and narrator in a part requiring an actor's level of characterization and multiple playing techniques of the utmost virtuosity. The music has a similar restless dynamism to that of Vie. The False Memories triptych incorporates many of the same types of gesture in three contrasting movements; jazzy and brash; melancholy and reflective in a microtonal atmospheric haze, and finally an uneasy gathering storm of rumblings and snarlings, all three movements characterized by echoing gestures passed back and forth across the orchestra. Kari Kriikku (clarinet), Helsinki Philharmonic Orchestra; John Storgårds.