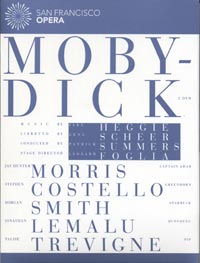 Description: Jake Heggie adds his voice to the many who have commented on the intrinsic musical, lyrical quality of Melville's magnum opus (read almost any passage aloud to prove it to yourself), and his opera, to an ingeniously constructed libretto by Gene Scheer, fully exploits these qualities and retains the epic sweep of the novel. Heggie's score is tonal and unabashedly neoromantic, with (perhaps unsurprising) echoes of Britten, and also Bernstein; a fondness for propulsive ostinati sometimes ventures briefly close to John Adams' romantic minimalism, but these, and other apparent influences from the tradition of grand opera, do not diminish the originality of Heggie's idiom. The expressive and totally natural vocal lines - clearly a pleasure for the performers - are a particular triumph among many appealing features of the work. The work is focused and concentrated, the music propelling the narrative along energetically; the libretto avoiding the many diversions of the book, while retaining much of its character (and utilising a good deal of the original dialogue). Inevitably, a stage presentation emphasizes the whaling story aspect of the work, but the complex psychological interactions and motivations - especially those of Ahab, around whom the whole piece revolves in both plot and music, are explored in detail. The visually stunning staging uses ingenious projection and animation in a strongly graphic stylized realistic approach, directed, filmed and edited with tight close-ups and wide shots to highlight the important action. 2 DVDs. Jay Hunter Morris, Stephen Costello (tenors), Morgan Smith, Jonathan Lemalu (baritones), Talise Trevigne (soprano), San Francisco Opera; Patrick Summers. 16:9 widescreen. NTSC region 0. 5.1 Dolby surround or 5.1 DTS surround or PCM stereo. 142 min. opera + 52 min. bonus material.