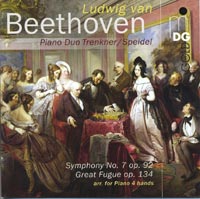 Description: Although previous four hand versions of Beethoven's symphonies exist, Scharwenka's were able to make full use of the newest piano-making techniques at the end of the 19th and beginning of the 20th centuries, allowing him to better represent the tone colors of the score through ornmentation and sound effects never before possible. Although Scharwenka didn't include them in his works catalogue, they were printed by Universal Edition in 1906 and the pianists here use one of those very prints, found in a second-hand music shop. The Grosse Fuge was one of only a handful of four-hands pieces Beethoven wrote and he only did it becaue he was unhappy with the commissioned version.  Receiving its own opus number it was published less than two months after his death and was only discovered again in 2006. Both works are considered at the limits of what's possible for four hands at one keyboard. Piano Duo Trenker & Speidel (1901 Steinway D "Manfred Bürki").