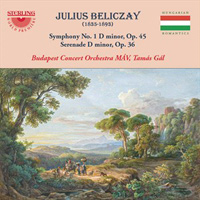 Description: This Hungarian was both composer and engineer and was involved in the early days of the creation of his country’s national railway system, which is why his music was selected for recording by the railway’s symphony orchestra (founded in 1945 - MÁV stands for “Hungarian State Railways”) in 1995 (the 150th anniversary of the railway). It was a limited, non-commercial, promotional item and this is its first commercial release. Beliczay’s major influences were fellow Hungarians Robert Volkmann, Ödön Mihailovich and Liszt. His first symphony (there are two) of 1887 is of impressive size - four movements lasting 45 minutes - and flows through the Mendelssohn/Schumann pipeline, notable for its unhurried and generally lyrical quality (and a surprising quote from Beethoven’s Ninth in the first movement!). No heaven-storming here; after all, Beliczay was 52 when he wrote it and was recently retired from his “day job” and looking forward to a retirement spent exclusively in music, so he might well be expansive and comfortable. The 19-minute, four-movement Serenade dates from sometime before 1875 and is a perfect fit for this genre alongside such pieces by Dvorák, Suk and Elgar. Budapest Concert Orchestra MÁV; Tamás Gál.