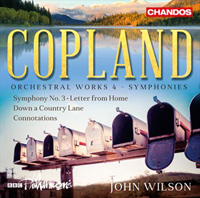 Description: The lesser-recorded original version of the Third Symphony comes with the twelve bars which Leonard Bernstein later suggested cutting from the fourth movement. Two short commissions complement the symphony: Letter from Home (1944, originally for “dance orchestra”) reflects the feelings of receiving a letter from a loved one. Down a Country Lane (originally commissioned by Life magazine as a solo piano work) is here performed in its orchestral version (1964), reimagined for a series of concerts showcasing youth orchestras. We won’t mention Connotations since it wears the unholy cloak of dodecaphony... BBC Philharmonic; John Wilson.