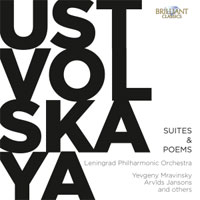 Description: Ustvolskaya is best known for composing music that unflinchingly confronts the big questions - death, God, loneliness – in an output of mostly instrumental pieces. Her language is spare, austere yet sized to contain the momentousness of her subjects. It will therefore come as a surprise to many listeners that she was no less capable than many of her Soviet-era contemporaries of turning her hand to much lighter and more functional music when it was required. Thus, all but one of these works would have suited the guardians of Socialist Realism just fine. The 1961 Poem on Piece, however, was first performed at a prestigious concert including new music from Europe and the US, and numbering among its audience a delegation of American composers including Samuel Barber, who remarked after hearing Ustvolskaya’s Poem: ‘If that is peace, I prefer war.’ The piece was not performed again and her career as an ‘official’ composer producing music to order was over. All these recordings are published for the first time, except for Children’s Suite and Lights in the Steppe, that were published on vinyl in the USSR (Children’s Suite was also issued in Japan on an album). The recordings of Young Pioneers’ Suite, Sports’ Suite, Hero’s Exploit and Poem on Peace (the only ones known in Russia) have never been published before. 2 CDs.