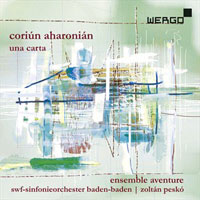 Description: Aharonián was born in Uruguay of parents who had escaped the Armenian genocide. He thus identifies as a South American composer of mixed background, with a particular and active cause to protest against colonialism and totalitarianism. This is important in his music, which is confrontational but also very spare, stripped down to essentials. The effect is of a rich tapestry of colorful vernacular expression from which all but the most basic shapes have been removed, leaving rough blocks that clearly reflect their origins but without filling in the details. Mestizo and Una carta, for orchestra and large ensemble respectively, together lasting half an hour, paradoxically represent this æsthetic of extreme economy to its best advantage, and both make a powerful statement in the process. Explosive drums, recognizable fragments of the accompaniment to Tango or Milonga dances, speech inflections and blaring clusters like car horns combine with sudden, shocking silences to generate a disquieting but instantly graspable picture of instability, protest, but also of celebration. The miniature pieces follow much the same formula, notably the extremely economical, but hugely appealing Gente (people), which suggests the rhythms and activities of Latin American daily life with almost no material at all. 'A Song' compresses into three minutes references to every composer who composed works about social justice you’ve ever heard of, and some you haven’t.