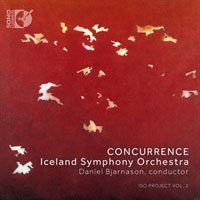 Description: In an introductory note, the booklet annotator poses the question "Can you hear a country in its music?" Hearing these four immensely impressive works, very different from one another yet seemingly hewn from the same rugged material, it is impossible not to hear evocations of Iceland's breathtakingly majestic and otherworldly landscapes in all of them. Þorvaldsdóttir's music is concerned with "natural phenomena and structures ... often structural, like proportion and flow ... 'nature music' consisting of slabs or floes of slow-moving material ..." (01U063). Metacosmos, utilising the full resources of the symphony orchestra, is more monumental and powerful than anything on that previous disc, impressive as those works were. Huge tectonic plates shift and grind against one another; it is hard to tell where the towering cliffs end and the infinite reaches of darkling skies begin. A passage of unformed, amorphous sound leads to a radiant chord and an immense slow pulsation which gathers momentum like a colossal cosmic machine grinding into life. An Edenic landscape emerges in the dawn after this upheaval. The swells and deep-flowing currents of Sigfúsdóttir's Oceans are formed of a less harsh substance, in musical terms having more in common with conventional harmony; its aquatic vistas are illuminated by many moods of constantly changing light. Quake, as the title suggests, is the most tumultuous and turbulent work here, the solo cello sounding like a fragile, panic-stricken human protagonist in the midst of the juddering, rumbling chaos of its surroundings. Tómasson's Concerto seems to have been constructed as a kaleidoscopic assemblage of irregular crystalline fragments in constant motion, the piano sparkling in scintillating gestures like flecks of bright metal in a mineral matrix, somehow conjured into animated life. The individual 'cells' - both the glittering piano flourishes and the rugged, blocky orchestral accompaniment - are uncomplicated and largely consonant; their perpetual fluid mobility is what lends the overall work a sense of complex intricacy. CD + Blu-ray audio disc. Iceland Symphony Orchestra; Daníel Bjarnason.