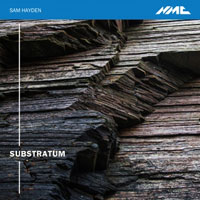 Description: As one might anticipate of a composer who studied with Jonathan Harvey, Brian Ferneyhough, and Michael Finnissy, Hayden is constantly on the search for novelty in timbre, is entirely unafraid of experimentation, is open to high levels of complexity, and is not especially interested in popular appeal. And so we find in these three works. Substratum is a substantial, impressive work of complex orchestral texture, composed of layers and underpinned, as the title suggests, by a deep magmatic flow of bass sonority. Tonality is, of course, entirely beside the point, though harmony is not, though generally highly dissonant even in the still, suspended interruptions to the busy progress of the music (general pauses, apparently an increasingly used device of Hayden's in his most recent music, also divide the piece into successive 'blocks'). The large quartet in seven movements is dedicated to Jonathan Harvey, and something of his influence can be felt in the way in which very little of the work consists of bowed tones; every kind of harmonic-producing, noise texture emphasizing, unorthodox bowing technique is used throughout, deconstructing the quartet so that attention is paid to the physicality of the playing process, the musical material being of subsidiary importance. In Relative Autonomy the sixteen players are indeed relatively autonomous, producing dense and busy textures stratified in pitch, like a lighter, more crystalline cousin to Substratum.